Maybe it is the time of year: after the solstice, a time of hope or after crazy Christmas, a time of space. For whatever reason, the collective spirit has lightened, even though the world still seems to be at war with itself. A friend who was in deep gloom over Christmas and New Year writes that her depression has lifted, another of that how being “stuck” in her writing, composing a silly poem about that has freed her up again, and I’m  being weirdly inspired by a chair. 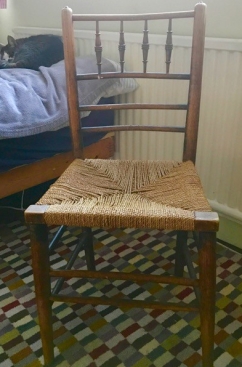 The chair has always been in my family, it was in my room as I grew up. We inherited it from my grandparents, and it just looks like an ordinary upright chair with a rush seat. Apparently it came from artist’s studio, which kind of gave it a romantic feel when I was a teenager, and somehow it seems to have followed me around and is still in our house today. It’s in the room where I paint. A couple of years back, I put the chair in a painting of a child in a strop, an artistic child whose foster mother only understands pink and spangly girls, but this is a denim jeans, creative small girl who hates her pink bedroom. Although she isn’t me, I understand her. The girl is Daisy, known Daze, a character in my Mullins family series, currently two novels Baby Baby, and The Labyrinth Year.

In June 2016 we went on holiday to our favourite place in Cornwall, and the sun shone as we picnicked, on 23rd, with crowds of others at a picturesque typical Cornish cove… When we came home, the painting wasn’t working. I simplified painting the chair, leaving out the essence of the design. I was also really stuck with the third novel, had problems with my computer, had a nasty illness, decided the website needed a make-over, submitted to gloom and pessimism.

And here’s the thing: today I discovered this is actually a ”Sussex Chair”. The spools on the back are central to a design otherwise characterised by simplicity and practicality. It’s a well known William Morris ‘arts and crafts’ design (though ours is a version without the arms). The story – that it came from an artist’s studio – fits with the period it was made.

Strangely that lifted the gloom: knowing I have to make a proper drawing of the chair, do the  intricate and worthy task, a work that takes time and care. It’s a kick-start to getting the novel writing going, and it’s come alongside finally having the website and computer problems solved.

Odd how a chair can call you back to creativity.

One thought on “The writer, the Sussex Chair, & Brexit”